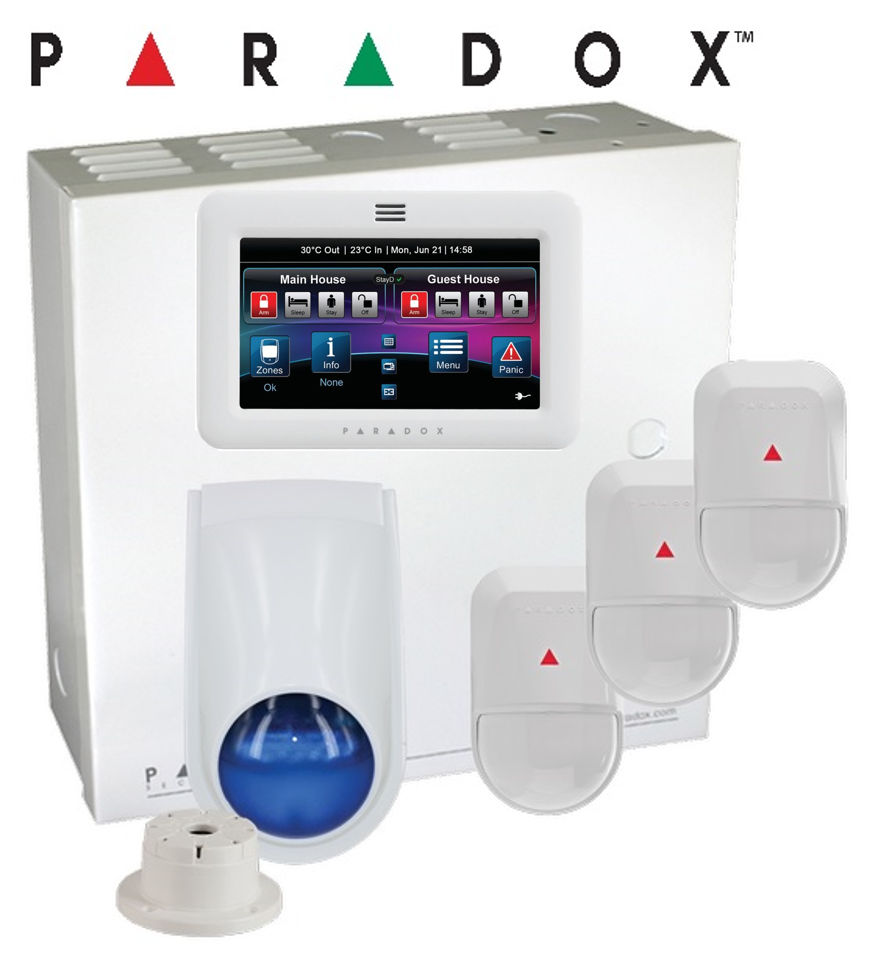 The two types of Home Alarm Systems are wired and wireless. Although wireless home alarm systems have the advantage of easy installation due to no cable runs, wired are the most reliable and preferred type of home alarm systems used by HCSWA.

Home Alarm Systems are fast becoming a standard inclusion of the modern home but not all alarm systems are the same so let’s start with the most basic home alarm system.

A basic alarm system consists of 4 parts the most obvious being the PIR, also known as motion detector, these are the sensors in the individual rooms that trigger a relay when they detect movement. It is quite usual to have 4 or 5 of these located throughout the home to cover most rooms and points of entry. The PIRs connect back to an alarm panel which is the brains of the system. There is also the alarm itself usually a combination of a flashing blue light and a siren. Then there is a controller where you are able to arm the system, this is most often in the form of a keypad on the wall near the main entrance.

With Basic home alarm systems you are able to arm and disarm the house and while the alarm is armed have the alarm’s siren and lights turn on when motion is detected by one of the PIRs, it will then stay in an alarm state until someone has disarmed the system except the siren which will time out after 5 minutes.

Although I have already covered these there are a few variations worth mentioning. If you have pets especially indoor pets it is probably worth getting pet immune PIRs that allow the movement of smaller animals around the house while the system is armed. For a more hostile environment like a workshop or garage there are detectors that use both Infrared and microwave detection to minimise the chance of false alarms.

These are designed specifically to detect whether a door or window is open or closed. A reed switch can either be surface mounted or flush mounted to keep it discrete and have different styles to suit any type of door or window even garage doors

Just like in Mission Impossible you can set up point to point beams to trigger if anyone passes through them these are particularly useful for covering across the front of roller doors.  These can also be used to

Although wired is always the preferred method sometimes it’s just not feasible, in some cases like if you have a detached garage or garden shed that you would like to cover or just can’t get a cable to it then wireless detectors are the way to go, they come in most of the types previously mentioned

Keypads are the interface for you to control the home alarm systems and can be as simple as the traditional numeric keypad or if you would like a more user friendly option there are colour LCD touchscreen keypads that can tell you where each zone of the alarm is and its current status. Whichever keypad you choose can then be complimented with a remote control which will be able to control the basic features of arming and disarming as well as some being able to open roller doors so you can disarm your alarm and open the roller door as you drive in.

The sleep and stay functions are used to allow residents to have varying ranges of movement around the home whilst the alarm is armed.

The stay function can be set to allow movement within some or all rooms whilst arming the perimeter.

The sleep function is usually set up so that bedroom areas are left disarmed allowing movement within the rooms and even to the bathroom.

Regular fees are charged for this service by the specialist security monitoring company and they vary depending on the company’s fee structure dictated by the chosen level of monitoring.

Apps vary from system to system. Some are free where others are subscription based. These apps also vary in the amount of control they give the user. A simple arm/disarm function is the basic function for all apps, with push notifications to alert the user to events as they occur with some apps. As long as the alarm sites and the mobile devices have active internet access, interaction with the home alarm systems are possible.